Survey of Environmental Awareness and Practices, 2013 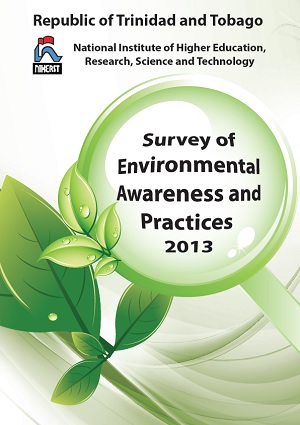 In this publication, the National Institute of Higher Education, Research, Science and Technology (NIHERST) presents the results of the Survey of Environmental Awareness and Practices, 2013. This survey is the second of its kind to be conducted by NIHERST as a similar study was undertaken in 2008.

The results of this study are intended to provide a better understanding of the population's knowledge, behaviour and practices with respect to the environment. The enquiry focused on concerns about the eco-system and biodiversity, consumption and conservation of water, waste disposal practices, transportation decisions and pesticide use; and has generated essential indicators for comparison with similar studies. In addition, information was obtained on several key social characteristics of respondents.

People’s lives and livelihoods are threatened by environmental concerns such as climate change, rising sea levels, unsafe practices in waste disposal and natural resource depletion, and failure to address these concerns could hinder sustainable development. This study measured and analysed changes in public knowledge, awareness and practices regarding the environment over time. The information can, therefore, assist researchers, decision-makers and environmentalists in formulating and evaluating policies.

This study measures changes in attitudes and behaviour towards the environment overtime and also facilitates and informs the development of effective environmental management, conservation and communication policies.