Trinidad and Tobago is making a name for itself in the world of science, and at NASA, as three trail-blazing science students from this country head off to participate in the NASA International Internship 2015 program. The 10-week internships are tenable at the prestigious NASA Ames Research Centre in Silicon Valley, California. Mr. Inzamam Rahaman, a computer science undergraduate at The University of the West Indies, will work on Java coding for NASA’s World Winds project. Ms. Asher Williams, a graduate scholar from New York University, will conduct research on advanced microbial strategies for the production of nutrients within crewed spacecraft and habitats. Mr. Stefan Hosein, who excelled during his internship in 2014, is returning on the invitation of NASA Ames to continue his research on biologically inspired machine learning.

This opportunity for exposure to the latest advancements in STEM fields will redound to the benefit of our country when they return to share their knowledge and ideas with others, and embark on R&D efforts of their own or in collaboration with international peers they met at NASA. 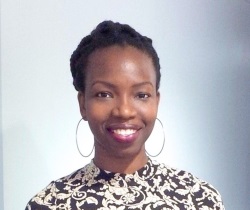 Ms. Asher Williams, a graduate scholar from New York University. She was selected to pursue research in the Bioengineering with respect to Human Nutrient Production in Space.

Mr. Stefan Hosein, NASA 2014 Intern, will be returning this year at the invitation of NASA Ames. He is a Computer Science student of the Univerity of the West Indies.

For more information about this program call (868) 663-6130 or e-mail NASAinternship@niherst.gov.tt.